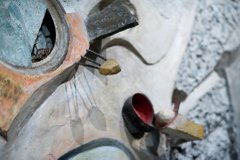 The Merz Barn Wall is part of a construction created by German artist Kurt Schwitters in a Lake District barn in 1947-8. The Elterwater Merz Barn was based on the idea of collage, in which found items are incorporated into an art work. Schwitters applied a rough layer of decorator's plaster and paint over these found objects, giving the three dimensional collage an abstract quality. Asked what it meant, he replied 'all it is, is form and colour, just form and colour'.

The barn was designed as a permanent structure, somewhere Schwitters could exhibit existing work. When he died in January 1948 it was left unfinished. In 1965, after lengthy discussions about the barn's future, the Wall was given to Newcastle University who undertook its removal, restoration and preservation.

Why does the Hatton have it?

In 1958 the Hatton Gallery hosted an exhibition of Schwitters' work. After it ended, the art historian and artist Lawrence Gowing – then Professor of Fine Art at the University – reported to the Arts Council of Great Britain that a 'building in Ambleside, now rapidly disintegrating, which housed a construction by Schwitters, should, he felt, be preserved'. This set in train a complex chain of events that led to the Merz Barn Wall being permanently installed at the Hatton Gallery.

At first the Arts Council tried to interest the Tate Gallery in saving all or part of the barn. After considerable deliberation and investigation into how to move the main wall, the Tate declined the offer in June 1962. Nearly three more years of discussions about the Merz Barn's future followed, involving Abbot Hall in Kendal, Newcastle University (then still part of Durham University), Marlborough Gallery in London and the Scottish National Gallery of Modern Art.

The artist Richard Hamilton, then teaching in Newcastle at the Fine Art Department, helped persuade the University authorities to get involved. The barn's owner Harry Pierce signed a formal Deed of Gift to the University on 26 March 1965. Hamilton coordinated a detailed survey of the barn before the Wall was moved.

Fred Brookes, an art student who had helped with Hamilton's survey, was the University's nominated representative when the move took place. He also undertook much of the significant conservation and reconstruction work when the Wall was installed in the Hatton in 1966.

Schwitters had often visited Norway, starting work on a second Merz construction in his holiday cottage on the island of Hjertøyain 1932. The relief work on the walls of this structure closely resembles the Elterwater Merz Barn. Parts of it still survive. When he moved to Norway permanently, Schwitters began a thirdMerzbau in a small wooden house behind his main home in Lysaker, near Oslo. Fleeing to Britain in 1940, he also left this construction unfinished. Fire destroyed it in 1951.

In 1947 Schwitters started work on the Elterwater Merz Barn, planning the finished environment for the first time. Schwitters' materials reflected his immediate surroundings: in the Lake District they included natural materials like flowers, branches and stones. Some collaged objects were concealed with plaster and paint. Schwitters intended to cover all four walls with plaster relief, displaying existing works in the nooks. Realizing his health was failing, he concentrated on finishing the one wall displayed here. Schwitters died just months into the Merz Barn's construction. His 'life's work', as he described it, would never be finished.

Schwitters and the Avant-garde

Born in Hanover, Germany in 1887, Kurt Schwitters had a long and varied career, working in visual art, graphic design and poetry. Schwitters was affiliated with several avant-garde movements including Der Sturm, De Stijl and Dada and his work was included in the Nazi 'Degenerate Art' exhibitions of the 1930s. Yet much of his art belongs to his own one-man movement, Merz.

Merzaimed close the gap between art and life, using found and discarded everyday materials to create a 'total work of art' orGesamtkuntswerk. The word Merz comes from a fragment of print used in one of his collaged Merzbild or Merz pictures: part of the word Commerzbank (Commerce Bank), it reflected the ability of collage to create new meanings as things are removed from their original context. Schwitters applied the idea of collage to everything he did, including poetry and musical composition. In the case of his constructions or Merzbauten he applied it to his entire living environment.

This use of collage led to a short-lived association with Dada. Berlin Dada used collage in a highly politicised way, seeking to reflect a broken and fragmented post-World War I society. Schwitters, however, did not believe in diluting the purity of art with politics. He imagined collage as a means of bringing order out of chaos rather than the other way round. He saw his art as 'a site of transcendence that promised the harmony and structure sorely missing in Weimar Germany'.